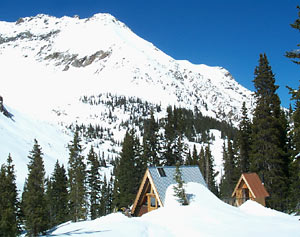 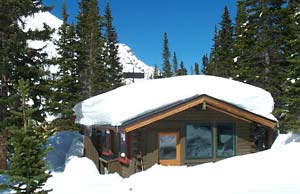 Green-Wilson is about 50 yards from Tagert

This pair of small huts, separated by 50 yards at the foot of rugged Pearl Basin, constitute the first popular ski hut destination in the Elk Range. The original Tagert Hut was a dam-keeper cabin for a hydroelectric plant during the silver mining of the late 1880s. It is named for Billy Tagert, an Aspen pioneer and teamster who hauled supplies to mining camps in the Elk Range.

The first known use of this cabin for backcountry skiing was when early mountaineer Otto Schniebs used it for expeditions during the 1930s. In 1946, Jay Laughlin came to the Aspen area from Connecticut. He had convinced the National Ski Association to set up a hut committee to build and maintain ski huts in the central Rockies. Laughlin repaired the Tagert cabin, which Billy Tagert donated to the Ski Association.

The Tagert Hut received more visitation under the care of John Holden in the 1960s. Holden founded the Colorado Rocky Mountain School in Carbondale and spearheaded, along with Fred Braun and Stuart Mace, the fund-raising and building of three huts above Ashcroft: the Lindley Hut in 1958, the renovated Tagert Hut in 1960, and the Markley Hut in 1964.

The Green-Wilson Hut was built next door to the Tagert, nearly 100 years later. It is named for Lu Lynn Green Wilson, who lived in Aspen in the 70's. Lu Lynn was a Laboratory Technologist who managed the Aspen Valley Hospital laboratory her untimely death from cancer.

Both Tagert and Green-Wilson were renovated in 1999 into cozy shelters beneath the awesome escarpments above. While they are in close proximity, they are far enough apart to ensure privacy for separate ski parties who brave an avalanche gauntlet to reach them from the Ashcroft trailhead six miles away.

Hut Location: Tagert and Green Wilson Huts are located approximately 50 meters apart, making them private enough for multiple parties, yet suffieciently close together for one large party to share. They are situated just below timberline at 11,280' in Pearl Basin, in the Elk Mountains between the towns of Crested Butte and Aspen. [locator map]

Snowmobiles: Snowmobiles are not allowed near the Braun Huts. Since 1963 the Braun Huts have been operated as a backcountry ski hut system. Many of the routes to the huts pass through avalanche prone terrain, loose unpacked snow, steep sidehills, and areas restricted to snowmobiles. More information about snowmobiles is available HERE and on the "Winter Trails & Info" tab below. PLEASE DO NOT RELY ON A SNOWMOBILE TO GET YOURSELF OR YOUR EQUIPMENT TO A HUT.

Warning: The Alfred A. Braun Huts and Friends Hut are located in areas of known avalanche terrain with recurring avalanche cycles. Routes are not marked or maintained.

Dates Open: Winter: Thanksgiving through the end of May

Owned By: Alfred A. Braun Hut System Oven: No Sauna: No

These cabins are accessed from Ashcroft via the Pearl Pass Road, which makes for a mostly gradual climb in to the huts, but the route does cross under numerous large avalanche paths.

The Alfred Braun Hut System was designed to be a back-country SKI system. As such the Alfred Braun Hut System strongly discourages the use of snowmobiles for access to the huts. The hut system was created for non-motorized travel. As such, snowmobile use can often detract from this unique experience. Our huts are located on U.S. Forest Service land, and each hut has unique travel management restrictions as governed by Forest Service Travel Management Plans. Around the immediate environs of each Alfred Braun Hut is a USFS developed recreation site envelope with snowmobile restrictions. Access to and from each hut is managed within the Developed Recreation Site Boundary. Snowmobiles should not drive to the front door of any hut. There are no snowmobile play areas within the Developed Recreation Site boundaries. Snowmobiles are not allowed in Wilderness Areas, or on private land without permission. In the winter of 2010-2011, the fines for snowmobiling in the Wilderness Areas were $550 per snowmobile. You must know where you are if you expect to remain legal and safe. PLEASE DO NOT RELY ON A SNOWMOBILE TO GET YOURSELF OR YOUR EQUIPMENT TO A HUT.

Snowmobile Restrictions: Located a hundred yards apart, these huts are protected by a winter-time motorized use closure of the Pearl Pass road from its intersection with the Montezuma basin road (a 1/4 mile below the huts). In addition, the Maroon Bells Wilderness area is adjacent to the Pearl Pass road (within 10 feet of the road). Snowmobiles may be encountered on the Castle Creek/Montezuma basin portion of the access route. [boundary map]

A note on Braun and Friends Route Descriptions: These descriptions are overviews and general in nature and intended for trip planning purposes. They generally describe the frequently used routes from the trailhead and not such routes between the huts, which may or may not overlap these routes. These descriptions are no replacement for the use of proper mountain navigation tools and skills, such as maps, GPS devices, compasses and the like. Navigation in poor weath-er or darkness has added challenges. These frequently used routes have been devel-oped over the years by users. Given the mountainous terrain and severe avalanche hazard, all such routes are subject to objective hazards that cannot be avoided. The route selections to access the huts are generally limited by terrain. There can be user choices within such routes that may reduce but not eliminate such hazards.