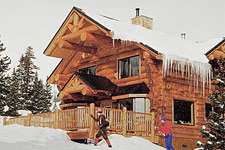 Owned by the Summit Huts Association, Francie's Cabin was built in 1994 in memory of Frances Lockwood Bailey, a former Breckenride resident who died in a tragic plan crash in 1989. Her husband, Brownell, after reveiwing the Summit Hut Association's master plan, decided to sponsor the hut in Francie's honor. Herb's Sauna, the wood-fired sauna at Francie's, was built in memory of Francie's brother Herb Lockwood, who wrote his college thesis on the geology of the nearby Crystal Lakes Basin.

Francie's is located about five miles southwest of Breckenridge and is one of the most popular huts in Colorado. It is handicap accessible in the summer, a warming wood-burning sauna and even a resident guitar.

This large hut has a big capacity for multiple parties or large single groups. It is situated near timberline, in the Crystal Creek drainage, on the flank of Peak 10 of Colorado's Tenmile Range, where mountaineering opportunitites abound, summer and winter.

Hut Location: Francie's Cabin is located at 11,360ft in the Arapaho National Forest, in central Colorado, about 5 miles southwest of the town of Breckenridge. [locator map]

Dates Open: Summer: July 1st through September 30th. Winter: Thanksgiving through the first week in May

Snowmobile Restrictions: The White River National Forest Travel Management Plan is now being implemented and the closure point for snowmobiles is now located at the Spruce Creek Trailhad, which means that snowmobiles are not permitted to travel to Francie's Cabin.

For more information regarding motorized restrictions (that may include substantial fines) in that area prior to your trip, please visit the WRNF Travel Management Implementation website. On the website you can download a Winter Motor Vehicle Use Map (MVUMs). These free maps and other information about motorized restrictions in the area are also available by calling the Dillon Ranger District at 970-468-5400.

There may or may not currently be a sign at the Spruce Creek location, but restrictions apply regardless of the absence or presence of signs

In the summer Francie's Cabin can be accessed using the same routes as winter but if you are planning on driving in from the Spruce Creek trailhead be aware that the Crystal Lakes Road is very steep and rough. Please see the above info sheet for more details. Vehicle access is never guaranteed to any hut at any time.

There are numerous hiking options around Francies. For a shorter hike you can head to Crystal Lakes or Mohawk for some fishing. The truly adventurous can head out on the Wheeler Trail which runs the length of the Ten Mile Range all the way north to Copper Mountain or south to Hoosier Pass. Mountain bikers can make loops using the summer roads in Breckenridge ski area along with the Burro Trail.